A few weeks ago I finished up the 12-week lattice light training plan. What follows is an enthusiastic endorsement of the plan and the training app that lattice provides, along with some reflections on where I’m at with climbing.

My motivation for signing up was pretty simple. I knew we were heading into lockdown. I have a good fingerboard setup at home, I thought that in order to make the most of the enforced home time I should get some structured guidance on how to use my home board. The 12-week plan seemed like a good way to get a sense of whether something like this could benefit my climbing. I’d always used my fingerboard in a very ad-hoc way, how well would I stick to a more structured approach?

I’ll get the easy stuff out of the way first, I think this coaching plan was great and the app that you use to track your training is fantastic. The most important question is did it work? I saw definite improvement, I have further to go to reach my goal, but I see this kind of training as now playing a critical role in helping me get there.

You’re asked to do a fitness assessment and set out your training goals. I’ve been climbing for a long time (getting on for nearly thirty years now), but have plateaued at V3/V4 for a long time too. My goal is to break through that plateau. The assessment is based on a home testing session that uses a 20mm hang-board edge and a pull-up bar.

My results from the assessment indicated that I needed to improve general conditioning and fitness in order to climb as hard as I want to. To be fair, I just barely scraped into the minimum fitness requirements to be able to do the plan in the first place. A successful outcome would be improved fitness levels on general strength, and finger strength in particular.

In terms of equipment needed to do the training program, a beastmaker 1000, with some counter weights hanging off the bottom, worked for me. This is super low-fi in terms of setup, and the weights did hang a bit between my legs, but it was enough to get on with things, it was enough to make progress. 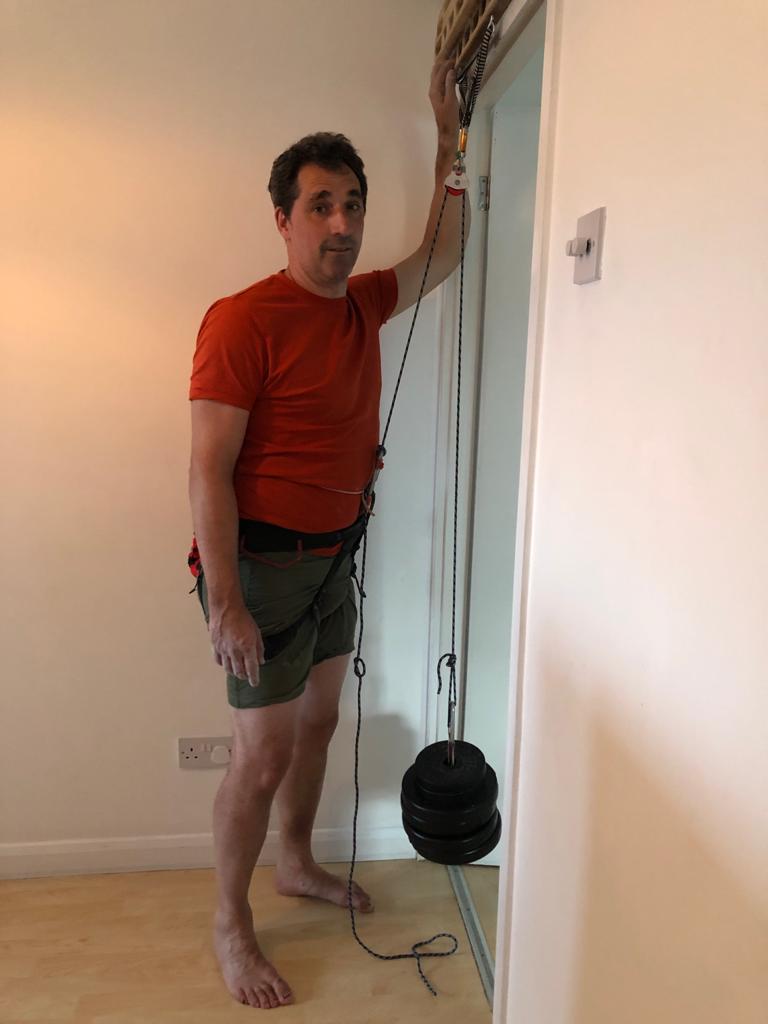 The results were as follows:

In addition to this I generally have felt stronger. In early April I tried some boulder problems on the Shoreditch Boulder, and was not able to do a number of problems that had been on my regular circuit before. At the end of the training program I was able to get up The Highgate shake and Mulvany problem standing start, looking at my log book on UK climbing it looks like I’d not done either of those since about 2015. I’ve probably done them once or twice since then, but certainly not in the last couple of years, so that was a definitive improvement.

Half way through the training program I also sent Porter’s Arete on the Mabley Green Boulder which is a solid V4. I got the feeling that with a bit of focussed effort I might have a chance at Ollie’s Arete - a solid V5 on the Boulder.

At the start of September I made it to the castle climbing wall for the first time since lockdown, and I flashed most of the V3/V4 circuit that I tried, while getting close to some of the stand alone V4s and actually getting off the ground on a number of v5s.

Overall this is as strong as I’ve been at the wall over the last year or two. So the program was a clear success from a performance point of view.

There were other key benefits. First it gave me a regular training structure to work with. I really enjoyed this. The strength testing protocols are very helpful in assessing small gains. I’d been using my fingerboard over the last few years in a very haphazard way, with no periodisation, or any planning. The training program gave me a very clear structure to follow.

Second the program covers a full range of climbing fitness activities. My hip flexibility has measurably improved. It’s clear that aside from raw finger strength, a big area of weakness for me is core strength. The core sets were most frequently the ones I struggled to complete. The following picture shows how the training is spread across a variety of activities types

Third the training app lets me track the volume and intensity of climbing. Since completing the program I’ve been using the library of training exercises to maintain about the same training volume. I’m really enjoying it. You can see here how the app helps you track this info.

The app itself is fantastic, it deserves a full review on its own. I’ve been working in software development for close to 20 years, and it’s hard to make something with this level of functionality that is also so easy to use. Huge props to the team. I think to a large extent the app takes away a large amount of the friction of training. You know you can just open it, get on with your training plan, and progress is going to be tracked automatically.

I did have two injuries during the training program, one minor, one medium. It wasn’t until after the program finished that I’d noticed that the terms and conditions indicate that you should alert the team when an injury happens, and I didn’t do that. I’ve been climbing for so many years, and have had a number of tweaks over the years, so I decided to adapt the program to isolate my areas of injury and continue with the training components that allowed for recovery.

The first injury was a minor tweak to the ring finger of my left hand while doing some static hangs on the 20mm edge. This is the first time in my life that I’ve trained regularly on a 20mm edge and I’m still adapting. 10 days of rest for the finger and some light massage saw the injury fully recover.

The other injury was a light year of my right lat. I was doing weighted pull ups with an additional 15kg load. I’d already done this exercise a number of times over the preceding weeks and this was not even my max load. On this occasion I was under a bit of time pressure, my children were shouting at me from the bedroom and I was generally not in a good mental mood to be training. On one of the pull ups I had a sharp pain in my right lat and was unable to do even a body weight pull up. About six weeks later the injury has recovered. The finger strength gains I mentioned at the start of this post, as well as the general improvement at the climbing wall, happened in spite of this injury.

One of the other things that I had to deal with is that I contracted COVID before the original training slot was due to start (middle of April). I was able to push the start date back a month, but I’ve had some minor lingering symptoms of COVID, in particular a deterioration of my aerobic fitness. Medical advice on how to deal with this is very mixed, but a picture is emerging that COVID puts some stress on the heart, so I have decided to keep aerobic training very light until next year, but even doing any training, making any progress, that’s been helpful in seeing that there is still a way to find daily improvement. In fact given the madness of the lockdowns that we are careering through, the ups and downs of limited social contact, having a regular program of activities has been a good way to make the passing of time have a bit more structure.

You know, time’s a ticking. I’m a climbing punter, I’ve been climbing for near on thirty years now. I started before bouldering pads were a thing, hell, even before bouldering was much of a thing. Back in Ireland in the early 90s bolts were verboten, and it was certainly discouraged to do anything other than ground-up ascents. I’ve kept at it, bumbling along at pretty much the same level, some years a bit bit better, some years a bit worse. I’ve always loved it, I’ve always enjoyed how you can either do something or you can’t, and how it might be a little change of position, of breathing or of attitude that makes the difference. There have been perfect moments, infrequent, but still seared into my memory. I can recall them now, old friends. The light filtering through the trees on a cold April morning in the forest of Fontainebleau, still not getting up the same old problem that I’d been trying for years, but if I close my eyes I can still feel the grain of the rock on my fingertips. The feel of crozzly limestone cracks, with sea spray filling the air, and no more blood in my forearms, moments before taking a huge whipper on the Atlantic seaboard at Alladie. Powering through the last moves of an absorbing sport climb in Sardinia, not noticing that I’d reached the chains - because I was so concentrated. Far far run out on some granite blankness in the mountains of Ireland, but only noticing, only seeing that two square meters of rock around me. Finding a boulder, alone in the woods in Switzerland, and just slowly unlocking a not too hard traverse, while trying to scare away the spiders from the critical hand holds. And so on, and always something nuanced, and always a way into moments that seem to uncover something about being, and being present.

And still I’d love to do some of the problems that have eluded me for all this time. Their names pop in, and run around my head, from time to time. The Masochist, Graviton, La Marie Rose, The Polish Traverse. Damn, but I’d love to even do the Mulvany Problem sit start (named after me by accident, but I’ve not done it since the damn boreholes were filled in).

So there we are, a line of time behind me, and that line running shorter ahead of me.

I’ve never trained in any serious way before, other than just climbing. As much as I love it, it’s always been third place behind family and job. Things are changing, opening up a bit. Two kids a bit older, both now in school. A new global realignment, everyone working from home. Now there is an opportunity to to find a bit of space in the day, make use of a fingerboard, meld the professional with the personal a bit. God knows, we lose something from all this lock down, but where we can, why not find a little extra, glean something back?

So that’s the plan then, incorporate regular and structured training into my schedule. Keep an eye to my weaknesses, look for the gains. I’m making some changes to my fingerboard setup to help with this too. The last 12 week cycle was mostly done on the 20mm edge on the beastmaker 1000, I noticed that the weights would often bump up against me, and I would often bunch my fingers into the side of the pockets, so I’ve move my fingerboard to a new location that allows for more distance for the pulley, and I’ve changed the fingerboard to have an edge that I can use that has no pockets on it, with the aim of climbing with better form. 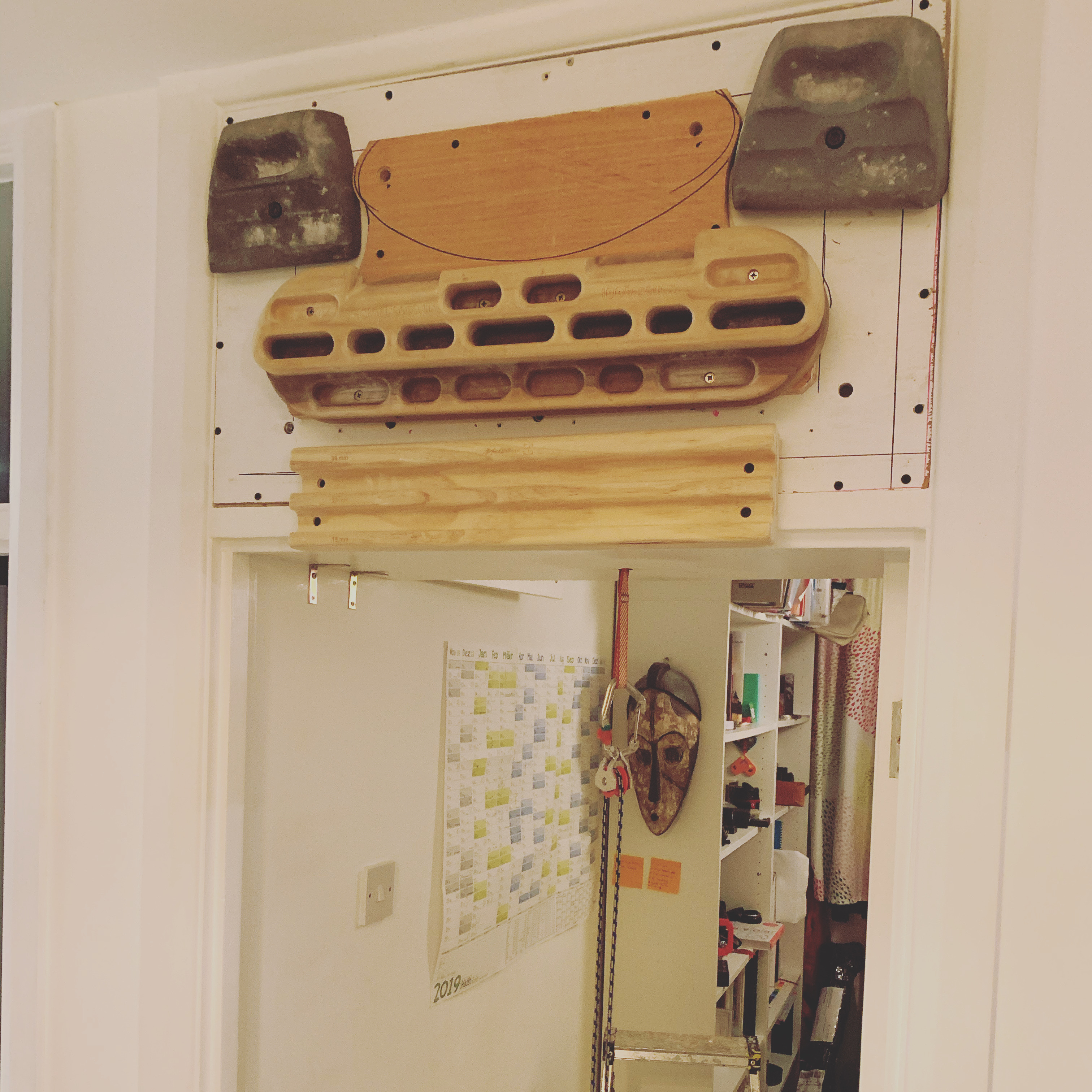 Hopefully this new setup will be a bit more efficient. I’m looking forward to picking up another cycle with a new 12 week lattice program. I’ll report back on how that goes towards the end of the year.