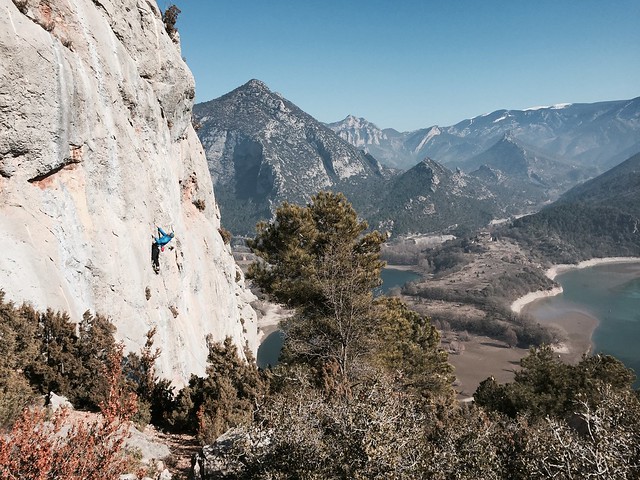 Last year I hit on the best way to set climbing goals (this was after many years of failing to hit my goals). The best way to do it was to set very short term goals, not ones for the end of the year, but rather quarter by quarter, and modify and update those goals as I went. In addition, I found that focussing not on outcomes, but on process, also helped a lot. (This is a bit like the “[Objective and Key Results](OKR system http://www.businessinsider.com/googles-ranking-system-okr-2014-1?IR=T )” method of goal setting used at Google).

I was going really well at the beginning of the 2014, and I was keeping my climbing goals updated in my blog, performance was improving then at around easter time I hit a big setback, I started I get extreme elbow tendonitis :/

I was forced to take another long break from climbing, and I just sat around looking at my elbow getting worse and worse. At one point cutting bread was painful, and It got to the point where I avoided picking my two year old son up, as that was also very painful.

Well, long story short, after five months of that I finally made the differences in my life that would enable me to heal my elbow (that started back in September). I sought out a consultation with the climbing doctor – Jared Vagy (probably the best money I’ve ever spent on climbing), and I did a root cause analysis of the problem, and I rearranged my life a bit to fix that problem.

The tendonitis had been caused by a new daily morning routine where I pushed my son to nursery every morning. I had been using a fold-up bike to get to work after leaving him to nursery, so I had to push the buggy with one arm, and that caused the excess strain in my elbow. The solution was to start putting our son into a bike seat which allowed me to bike him to nursery rather than to push him. I also found the right form of exercise to deal with golfers elbow.

Now I’m in a Climbing trip in Spain (as I draft this post) and I am actually able to climb again.

My form is a bit rusty, but a good focus on training for this trip between December and January has paid off and I’m able to get up some routes. It’s been nearly two years since I was last out doing routes. The location is amazing, the people I’m climbing with are a lot of fun and it’s great to just get outside and be able to focus on some delicate moves, listening to bits of my body complaining , looking out over the valley.

By the end of day one of a short trip (two and a bit mote days to go), my key goal for the rest of the trip was to get up a few routes day on day, work on focussing on movement, and getting to a point where I was moving freely on the rock again, and see if I could expand my reservoir of endurance a little. I had many open questions in my mind about how hard I might be able to climb, I was hoping to be able to get up some routes at the top end of my ability, but was also aware that I might get totally shut down either mentally or physically since it had been so long since I was out. I was also aware that my elbow might give in too.

In the end the days were short, each day no more than four routes done. I hit a personal high point, I’ve only ever climbed one route harder, and that was 11 years ago.

Five weeks ago in the gym I was training with one of the other people on this trip, and he said he would not have given any chance for me to get up the route that I’d did, but the main things that got me up the route were the time I put into finger boarding in the past three months, and getting comfortable moving on the rock again. I was able to commit to the moves, just happy to be climbing at all. Hitting that high point was personally very satisfying, and it was a great trip. My psyche is very high again.

I also came away mostly unscathed. By the last day one person had a badly injured shoulder, one had what looks like a tear in a knee ligament, and one found the conditions too cold to be able to climb on the last day. I’m extremely fortunate to come away with some really good ticks and only some tired arms and slightly scraped hands as collateral damage. As I, and those around me, get that bit older, preservation is becoming as important as improvement.

I emailed Jared to thank him for his input, and he replied

You made the changes yourself by committing to fixing your weaknesses and being aware of your body, I just gave you the knowledge and tools to do so.