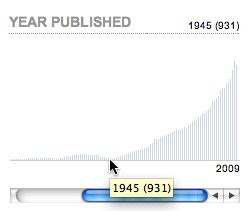 Springer have just launched a web app that lets you search for
locations of authors, AuthorMapper. They
have done this by building an XML database with the citation metadata
for all of their papers. You search for terms or authors and it will
generate a google map with the locations for your search terms, or
people. The site also has some other infoporn, including a histogram
for authors published by year for your search term.

This box is along the right hand side of the page. From the default
home page there are two things of interest about this little graph.
This first is the rate of increase in the numbers of authors per year.
From a first rough look, it looks somewhat linear from 1948 through to
1980, and then it starts to speed up a bit. No real surprise there.

The other really interesting thing is the presence of two dips in the
numbers, one numbers, one for the First World War and one for the
Second World War. I've included a screen shot of the graph below
hi-lighting 1945.

I think that this data is historically quite interesting, as Springer
was founded in Germany in 1842 by Julius Springer, and as a result
their archive for those years is probably a good reflection of the
health of intellectual output from Germany during those times.

Springer also played a role in helping to rebuild science in Germany
after the first world war through the publication of some proceedings.
There is a nice letter of thanks from a number of luminaries in the
scientific community to Springer, you can see an image of the letter.